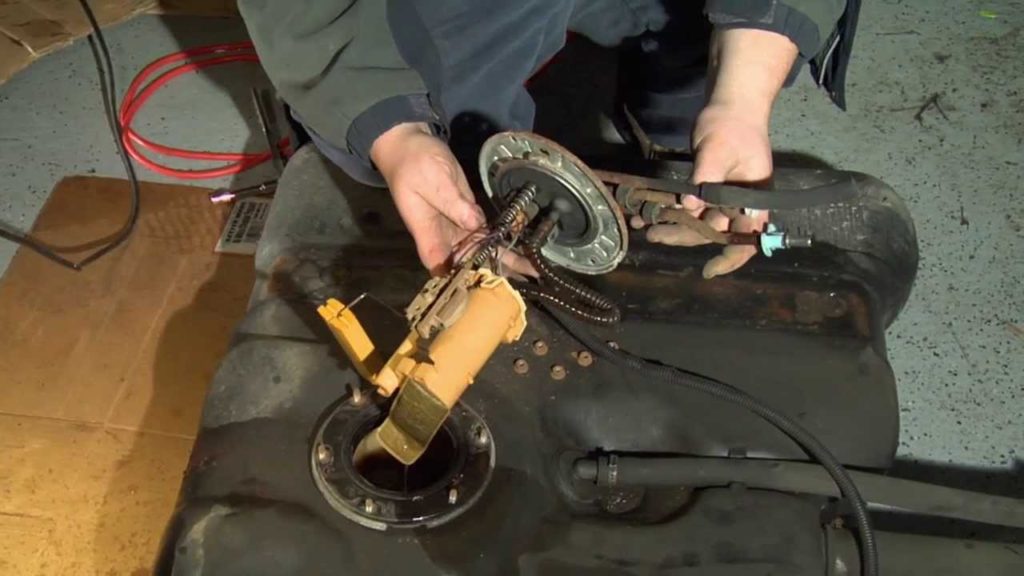 Automotive Fuel Pump Replacement Service near Las Vegas: The fuel pump’s task is to send fuel from your car’s gas tank to the engine. Fuel pumps are typically powered electrically and can be located either in or on the car’s fuel tank. Mobile Mechanics of Las Vegas, The convenience and cost of fuel pump replacement is based on the vehicle’s design. Deciding to replace a fuel pump should occur only after it has been determined that the problem with the car is not electrical or related to something else.

The clearest indication that your fuel pump is not working is that your car will not start. (Not surprising if fuel is not getting to the engine.) One way to know if the fuel pump is faulty is if you switch the ignition on and you cannot hear the pump motor activating within the gas tank. Another sign is periodic loss of driving power, especially when acceleration or while traveling at highway speed. If the fuel pump seems to be alright the issue might be that the fuel pickup device in the fuel tank has become blocked and cannot deliver enough gasoline.

With a little good luck, your pump will endure just fine for the whole lifespan of your car. Fuel pumps are not typically a routine maintenance item, so replacement is usually done only as needed. Mobile Mechanics of Las Vegas, Some vehicle owners opt to replace as part of preventive maintenance, but until the pump shows signs of malfunctioning there is typically no reason to do it. Many cars have filters that can get clogged, so the filter should be looked at and replaced if needed when a car is diagnosed due to issues with its pump.

If your car or truck is having trouble starting or hesitates during acceleration, don’t risk getting stranded. Bring it to our Mobile Mechanics of Las Vegas shop for affordable and fast service.

How to remove and replace your fuel pump

Automotive Fuel Pump Replacement Service near Las Vegas: Replacing a fuel pump won’t look the same for every vehicle, but these basic steps are a good place to start.

First, make sure your vehicle doesn’t have an access panel that will allow you to access the pump without removing the tank. We’ll show you what to do if you do need to drop the tank.

We always put safety first, so make sure you’re thorough and careful. Don’t forget to wear safety glasses and gloves. Give yourself room to work and have cleanup materials ready to clean any spills immediately. Work in a well-ventilated area away from an open flame or anything that could cause a spark or ignite fuel, such as pilot lights and incandescent light bulbs. Make sure you have a fire extinguisher on hand. Don’t smoke, either. Always relieve fuel pressure prior to opening fuel systems because releasing fuel under pressure can cause fire and injury. Store fuel in an approved container like a gas caddy or gas can.

Procedure for replacing your fuel pump

A fuel pump’s primary task is to deliver fuel from the storage tank to the engine, and works with multiple other auto parts to accomplish that duty. That can make it difficult to know whether or not it’s failing, unless you know the symptoms of a bad fuel pump.

The most important key to diagnosing a car is listening and understanding how it normally works, runs, and acts on a daily basis. What sounds does it make? What rattles? What are its normal RPMs?  With this knowledge base, and an attentive mindset, you’ll notice when the vehicle starts running irregularly.

Realizing the vehicle starts hard, struggles to maintain idle, or flexes less power is the first step in accepting there’s an issue and setting out to fix it. Because so many car parts are interconnected and interdependent, diagnosis is not always a simple exercise. It requires trial and error, and pinpointing the exact source often requires the process of elimination.

That’s what we’re here to discuss, in regards to fuel pumps. Follow The Mobile Mechanics of Las Vegas’s thorough guide to bad fuel pump symptoms and figure out what the heck is going on with your ride.

Automobiles have primarily transitioned away from mechanical pumps on the engine block in old cars to electric pumps inside the gas tank on modern vehicles. Below, we break down the various types of pumps and how they work.

Mechanical fuel pump: A mechanical fuel pump uses positive displacement with a plunger or a diaphragm. In a cyclical action, the pump draws in fuel, traps it, then moves that fuel toward the carb and engine, and repeats the process.

When Should You Have The Fuel Pump Replaced?

Automotive Fuel Pump Replacement Service near Las Vegas: There are several common signs which indicate an issue with the fuel pump. The most common symptom is the engine sputtering when the car is being driven at a high speed, particularly over an extended period of time. The car will generally run well for around 10 minutes before the issue becomes apparent, and it will usually subside after a minute of two. The sputtering is caused by the pump failing to provide a consistent stream of fuel to the engine, usually a symptom of low pressure in the pump.

Another common symptom is that the vehicle will lose power when accelerating, not unlike the symptoms experienced when travelling at high speeds. The car will usually start to accelerate normally before jerking around and sputtering, then it should return to the normal acceleration pattern. Again, the lack of pressure in the pump means the engine isn’t getting the steady stream of fuel needed to accelerate.

A faulty fuel pump can also cause the vehicle to lose power during times of stress, such as accelerating up a hill or pulling a load behind the car. This is caused by the fuel pump failing to meet the increased demand for fuel, and can cause stuttering or a loss of power. Another common symptom is for the engine to surge without driver intervention, much like stepping heavily on the accelerator, moving the car forward unexpectedly. This is usually caused by a worn out pump which struggles to draw the electricity needed to maintain a constant supply of fuel. It will occasionally ratchet up the pressure unexpectedly, resulting in a surge from the engine.

The most severe symptom is the vehicle failing to start at all. If the previous symptoms are ignored for an extended period of time, the chances are the owner of the vehicle will end up in this situation. When the pump fails completely there will be no fuel reaching the engine during ignition, meaning the engine won’t start at all.

What Is Done During Fuel Pump Replacement?

How to Save Money on Fuel Pump Replacement

Replacing the fuel pump on your own is something which probably shouldn’t be attempted by most people. It’s a tricky job and it’s an integral part of the vehicle, so it’s a job best left to a professional.

As with most repairs, if you’re looking to get the best deal it pays to shop around. Get a few quotes from places in your area, check out the reputations of the ones offering the best prices and make your decision from there. You should find you get a high standard of work at the best possible price.

If your car or truck is having trouble starting or hesitates during acceleration, don’t risk getting stranded. Bring it to our Mobile Mechanics of Las Vegas shop for affordable and fast service.

Automotive Fuel Pump Replacement Service near Las Vegas: First and foremost, don’t jump to conclusions and perform a thorough diagnosis to ensure the fuel pump is faulty. Or have a professional carry out the diagnostics for you. Because there are a lot of other problems that can mimic a faulty fuel pump, you want a solid assessment before jumping in.

If you determine the fuel pump does indeed need to be replaced, don’t forget to install a new fuel filter at the same time. Modern, return-less fuel systems have the filter integrated into the assembly and it will usually come with the new pump.

But older vehicles may have a separate fuel filter installed in the line coming from the tank. Filters such as these should be replaced at the same time as the pump to prevent debris from contaminating the new unit.

Automotive Fuel Pump Replacement Service near Las Vegas: Replacing a fuel pump isn’t cheap. On modern vehicles, which have an integrated fuel pump assembly, the part itself can cost hundreds of dollars.

As a one-stop vehicle breakdown solutions provider, we offer a wide range of vehicle repair services, all of which are designed to get you back on track and rolling as fast as possible. This includes diagnostics and repair services offered by our vetted mechanics, as well as our dedicated tow contacts and our attention to detail and consistent service protocols – all designed to guarantee a quality customer experience when you need it most. When we come out to do a repair for you, we can do any and all of those repairs that are needed to get you back up and running. For example: 1. Replace or boost a Battery 2. Replace an Alternator 3. Replace a Starter 4. Diagnose any other problem and provide a fix quickly.

What is the fuel pump and how does it work?

The fuel pump supplies pressurized gasoline to each of the fuel injectors in a car’s engine. The fuel pump is powered by a compact electric motor and is located in the vehicle’s gas tank. The pressure and output of the pump are controlled by a regulator. Filtration of the fuel occurs either in the fuel tank using a pickup screen or externally with a replaceable filter mounted in the fuel supply line.

When to consider replacing the fuel pump?

A high quality, OEM fuel pump can last indefinitely. However, as with any electro-mechanical component, a fuel pump will eventually degrade and fail. If it fails to produce adequate pressure or completely quits operating, it will need to be replaced. This failed condition can sometimes be preceded or accompanied by one or more of the following symptoms:

How do mechanics replace the fuel pump?

Is it safe to drive with a fuel pump problem?

Usually, it’s still safe to drive, but the pump may lead to an overheated engine and catalytic converter. Complete fuel pump failure can leave you stranded out on the road, but many times a car won’t start before initially driving.

However, if the fuel pump problem involves leaks of gasoline or vapors, it is unsafe to continue driving, and should immediately be checked by a qualified mechanic.

When replacing the fuel pump keep in mind:

What tools do you need to install a fuel pump?

The tools needed to replace your fuel pump vary, depending on what type of car you have. But, in general, you will need:

How long will it take to replace the fuel pump?

The labor to replace the in tank fuel pump and the inline fuel filter that should be replaced with the fuel pump will take 4 to 5 hours labor.

Is changing a fuel pump easy?

Should you do the job yourself? Installing a fuel pump can be difficult – especially if you’ve got a full gas tank. Plus, because fuel is flammable, the task can be dangerous. If you decide to tackle the job yourself, make sure to take the necessary precautions and have a fire extinguisher on hand.

What are the signs of a bad fuel pump?

Symptoms of a Bad Fuel Pump